The sprawling Eko Club in Surulere was agog on Thursday when the Chairman, Senate Committee on Industries, and the Senator representing Lagos East Senatorial District, Distinguished Senator Mukhail Adetokunbo Abiru, FCA arrived at one of the foremost social clubs in Lagos for an interactive session with the members.

The #DoingGood Senator was there to speak with notable Lagos elites on his achievements and plans for the people of Lagos East when re-elected for another term. The lawmaker is no stranger to Surulere. His Alma mater, Government College Lagos, Eric Moore, was just a few metres from Eko Club close, off Bode Thomas.

Senator Abiru was at the Government College Lagos, between 1975 and 1981, a year after Eko Club was founded. He also lived at 8, Abibu Oki Close, Surulere between 1969 and 1977. So, Surulere is familiar terrain to him, he witnessed how the place evolved over the years.

Senator Abiru, who has changed the narrative of governance and representation in Lagos East Senatorial District, also gave back to his secondary school. The Senator completely overhauled the school’s auditorium and administrative blocks which were in a decrepit state. 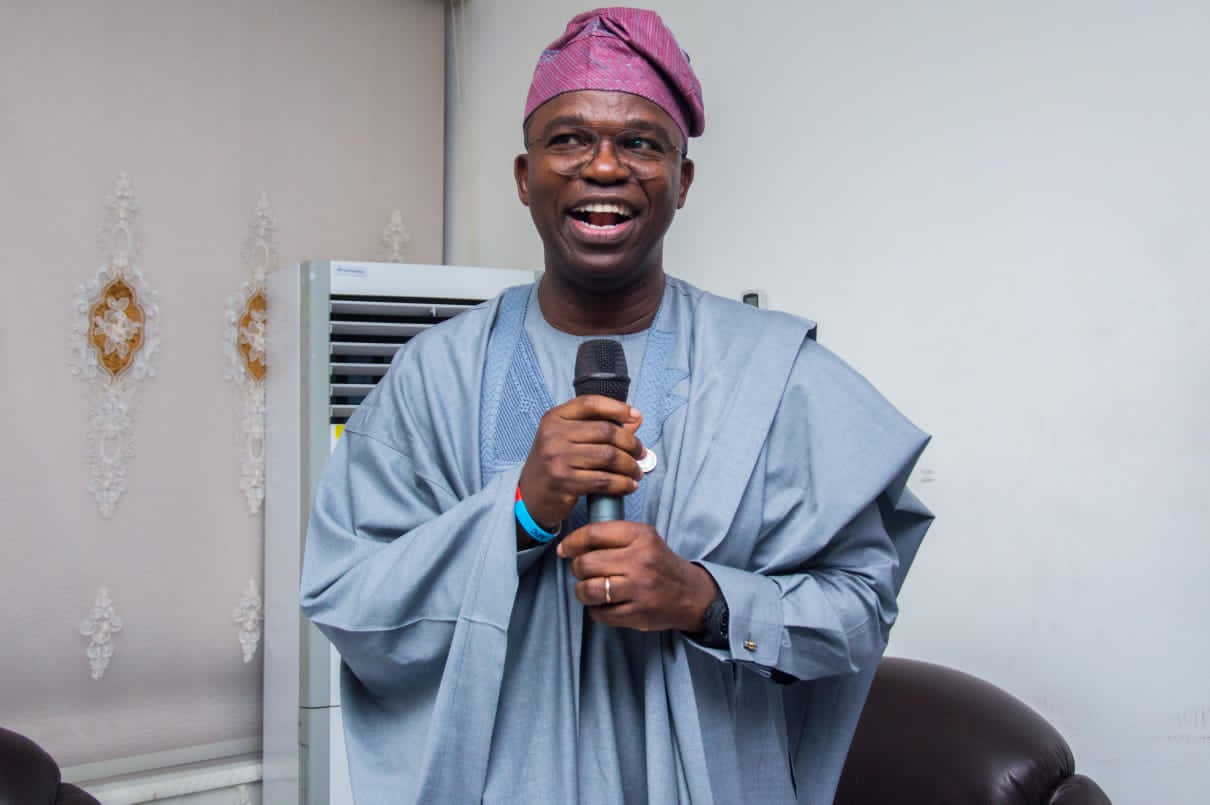 The 700-capacity seater auditorium with gallery got totally refurbished with 24 toilets both on the first and ground floors. The auditorium has expansive administrative wings on both sides. The four massive offices for Senior School officers and auditorium managers have got exquisite toilets.

There are four classrooms in the block that can seat 30 students each. Also, provision was made for two staff rooms for teachers with two waiting areas. Five administrative offices on the top floor and two big lecture halls on the ground floor were also rehabilitated.

This gesture and various projects like Schools, hospitals, stadium, market, and other people-oriented interventions of Senator Abiru in his Senatorial District within two years in the saddle must have informed the decision of the Eko Club Executives to invite him as a special guest for their interactive session.

Unassuming Senator Abiru stood before the elders and members of Eko Club to share his experience and achievements as the Senator of the Federal Republic, he also unveiled greater plans he has for the people of Lagos East in another four years.

He said, “Mr. Chairman and Distinguished Members, let me quickly reflect on my journey in the Senate so far. While I was elected on December 6, 2020, I formally assumed office on December 15, 2020. We immediately set out on a mission anchored to #DoingGood, a mantra I have been consciously pursuing in the larger interests of my constituents. The mantra was founded purely on three major pillars - legislation, empowerment, and endowment.

“Under legislation, specifically, I have successfully sponsored 13 private member bills; co-sponsored three other bills, and moved two motions on issues of national significance. Of note among these bills are the Copyright Bill, 2021, and Franchise Regulation Bill 2022, both of which are currently at the final stage of enactment.

“When eventually enacted, the legislation will be catalysts for revamping Nigeria’s creative economy; strengthening the country’s macro, small and medium enterprises (MSMEs), and empowering a teeming number of our youths to effectively operate in the digital environment.

“I have also moved the motions on the imperative of rehabilitating Ikorodu-Itoikin-Epe and Ikorodu-Sagamu roads. As we all know, these federal roads are of economic significance not just to Lagos East, but also our country. First, the roads directly connect all LGAs in Lagos East together and to other parts of the state. Second, the roads connect Lagos East to other states of the federation, especially those in South-west, South-east and South-south.

“Until our interventions, the roads had become deplorable and largely collapsed, a condition that subjected my constituents to undue hardship and undermined socio-economic activities in the district. While the rehabilitation of the Ikorodu-Sagamu road is already at the stage of completion, the federal government recently promised to expedite the rehabilitation of the road linking Ikorodu to Itoikin and Epe.

“Under empowerment, I have authorised over N150 million direct credit transfers to over 2,500 vulnerable persons in Lagos East under our COVID-19 Financial Relief Scheme. The beneficiaries of the scheme include widows; persons with special needs; aged; unemployed youth and women who each receive N5,000 direct credit transfers to their respective bank accounts every other month.

“I have facilitated the construction and delivery of blocks of classrooms in no fewer than 15 public schools across all LGAs in Lagos East. I have also facilitated a fully equipped computer laboratory at Igbobi Junior High School, Somolu; 200 solar street lights at Lagos State Polytechnic, Ikorodu and 16 toilets and solar-powered borehole in Aga Primary School in Ikorodu to mention a few.

“In addition, I have facilitated the following socio-economic facilities: 1) three primary health centres in Isiwu, Ikorodu North; Agboyi-Ketu, Lagos State University of Science and Technology; 2) one youth development centre in Epe comprising 960-seating capacity stadium; 3) rebuilding of Oluwo Market in Epe; 4) over 24 transformers have been installed in various communities in this senatorial district.

“Under endowment, I have initiated different programmes under  Senator Abiru Innovation Lab (SAIL). Each of the programmes is aimed at equipping our young graduates with employability skills; strengthening the capacity of young entrepreneurs to effectively operate in any part of Lagos East and preparing our youths generally for the boundless opportunities that digital economy presents in this age.

“Currently, no fewer than 2,300 youths in Lagos East applied for our SAIL programmes. Of this figure, over 200 have already undergone training in different programmes of interest at our SAIL Centre, Ikorodu. Another set of 900 eligible applicants have been trained on-line, expected to equip them with skills that can help them pursue robust careers in IT and speed up development of their own businesses.

“We have equally set up a N300 million Constituency Intervention Revolving Loan. This intervention is born out of our passion not just to equip our young entrepreneurs with innovative skills they require to excel, but also guarantee them access to funds they need to start up their businesses or accelerate the growth of their businesses.

“At 6% per annum, this intervention will definitely boost the growth of MSMEs in Lagos East; help the beneficiaries create wealth and reduce all forms of menace associated with unemployment, among others. We have consciously committed to this mission, leveraging my political and social capital to create an enabling environment for young entrepreneurs to operate without let or hindrance.

“In pursuit of my human capital agenda, I instituted the Annual Bursary Scheme in 2021 as part of our endowment programmes. In the main, the scheme aims at supporting our children, who are undertaking different programmes in tertiary institutions nationwide.

“At its inauguration, no fewer than 600 students benefited from this scheme. The selection process for the second edition has already been completed. In a matter of days, our Bursary Advisory Board, comprising highly esteemed scholars from our tertiary institutions, will announce the names of those who will benefit from the second edition of our bursary scheme.

“Mr. Chairman and Distinguished Members, this is what I have been doing for the last two years. I assumed office as a Senator representing Lagos East. Given these modest records of stewardship, I have truly kept all my campaign promises and I am still committed to them.

On the forthcoming elections, Senator Abiru urged members of the Club, Lagosians, and Nigerians to support and vote Asiwaju Bola Ahmed Tinubu and his Vice, Senator Kashim Shettima, and Governor Babajide Olusola Sanwo-Olu and his deputy, Dr. Obafemi Hamzat, and all candidates of the ruling party.

According to him, Asiwaju Tinubu understands the concept of leadership both on public and private levels.  He said Governor Sanwo-Olu demonstrated great capacity and delivered on campaign promises despite COVID-19 and global recession challenges.

Abiru disclosed that his focus for the next four years if re-elected will be: MSMEs Support, Special Status for Lagos, Fiscal Discipline, and devolution of power.

Members of the Club reacted to the paper of the Senator and asked relevant questions on COVID-19 support for vulnerable constituents, the economy, and the monetary policy of the government.

In his remarks, Eko Club President, Hon (Barrister) Tajudeen Jaiyeola Agoro, commended Senator Abiru for his sterling performance in office and thanked him for honouring the invitation of the Club. Senator Abiru was inducted as a member of  Eko Club.