The #DoingGood Senator who addressed teeming members and supporters of the party at Ikorodu Town Hall, the venue of the mega rally enjoined the electorate in Lagos East to re-elect him in 2023, stressing that he had delivered on the promises he made in 2020 when he was seeking their mandate. 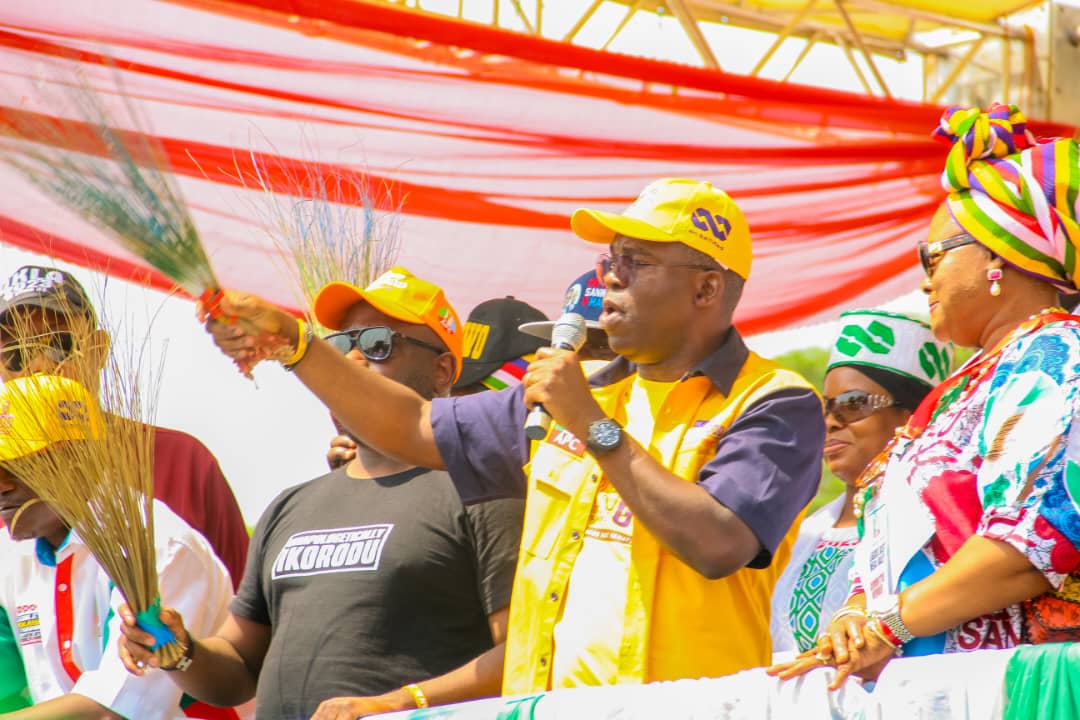 He said, “For the past 24 months, we have been able to record modest achievements with the profound support of our people and indeed our great party. Within this period, we have been able to touch lives directly and indirectly; sponsored and co-sponsored bills and motions of national significance and provide support for our people in Epe, Ikorodu, Ibeju/Lekki, Kosofe and Somolu Local Government Areas, especially at the time of critical needs and national emergencies.

“In the spirit of collective responsibility, we set out on a mission anchored on #DoingGood, a mantra we have consciously nurtured and faithfully actualised since my inauguration on December 15, 2020. This is founded on three major pillars - legislative role, empowerment and endowment.

“In these three focal areas, we have been doggedly making strategic interventions in the last 24 months, and the people of Lagos East have been at the centre of these interventions.

“Under the legislation, for instance, we sponsored 13 private member bills; co-sponsored three other bills and moved two motions on issues of national importance. Of note among these bills are Copyright Bill, 2021 and Franchise Regulation Bill 2022. When finally enacted, these legislations will be catalysts for revamping Nigeria’s creative economy; strengthening the country’s macro, small and medium enterprises (MSMEs) and empowering a teeming number of our youths to effectively operate in the digital environment.

“I have equally moved the motion on the need to urgently rehabilitate Ikorodu-Itoikin-Epe and Ikorodu-Shagamu roads. As we all know, these federal roads are of economic significance not just to Lagos East, but also to our country. First, the roads directly connect all LGAs in Lagos East together and to other parts of the state. Second, the roads connect Lagos East to other states of the federation, especially those in the South-west, South-east and South-south.

“Until our interventions, the roads had become deplorable and largely collapsed, a condition that subjected our people to undue hardship and undermined socio-economic activities in the district. While the rehabilitation of the Ikorodu-Sagamu road is already at the stage of completion, the federal government promised just the penultimate week to expedite the rehabilitation of the road linking Ikorodu to Itoikin and Epe”.

The Senator also informed the people of Senator Abiru Innovation Lab(SAIL), the first-of-its-kind innovation hub in Lagos East Senatorial District he set up for young people and entrepreneurs, N300 Million Naira Constituency Intervention Revolving Loan, Health facilities and construction of blocks of classrooms he facilitated across the district, provision of a grant to 1,250 market women, award of bursary to 600 higher institution students and monthly support for over 2500 vulnerable constituents among others laudable achievements.

In his remarks, Lagos State Governor, Mr Babajide Olusola Sanwo-Olu urged residents of Lagos East to support and vote for the Senator and himself and other candidates of the party in 2023. According to the governor, his administration had impacted lives and communities in Lagos East in the area of infrastructure, health and education.

The Chairman of the party in Lagos State, Pastor Cornelius Ojelabi, said the rally was an opportunity to showcase the achievements of the APC in Lagos State, and in particular the giant strides of various elected officials on the platform of the party.

Director-General, of APC Lagos State Governorship Campaign Council, Senator Ganiyu Olarenwaju Solomon (GOS) said he was sure that APC would win all the way. “ As we are winning in Lagos, we are winning all over the federation”, the former lawmaker declared.

The apex leader in Ikorodu Division and member of the Governance Advisory Council in Lagos State, His Excellency, Prince Abiodun Ogunleye commended the APC-led administration in Lagos for meeting the yearnings of Lagosians.